They said it was going to be sunny and warm.
I believed them, and was not disappointed.

In an effort to take advantage of the fleeting days of autumn (and thus the fleeting days of bearable weather), the Pennypacker Park on the Cooper River became my studio, today. My arrival was later than intended, and with only 3 hours to paint, it became clear that a rushed pace would be mine for the afternoon.

After parking, with camera in hand, I took my ritual walk about to assess the landscape and decide the best location for the painting. After narrowing down the spot, I returned to the car for the necessities. 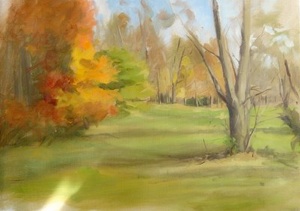 Apparently the rain from last week was a little overwhelming for the soil as much of the area where I wanted to set up resembled a swamp. I found a slushy island to set up camp where my bag,( poor bag, there was nowhere else for it to go than on the ground), became soaked through on the bottom – along with my camera and business cards. No harm done, though.

During one of my breaks, I took a few photographs. This will definitely be a park that I will want to come back to in the springtime. 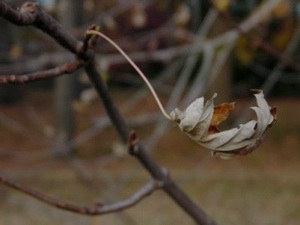 I became inspired by the leaves. What a beautiful way to die.

The sun passes through the leaves as though they are stained glass. The Master Artisan created living stained glass. Something we humans can only attempt to imitate. 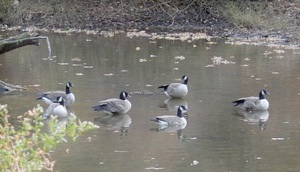 Canadian Geese apparently have a popular hangout. Aside from their personalities, they are really beautiful birds. I wonder how much longer they’ll be around before flying to warmer places.